Wow! The last time I posted was for Easter and now it's summer time! Where has the time gone? Let's think, lost my job, got pregnant, started my Real Estate career and trying to get ready for new baby! That's where the time has gone! One thing I am trying to do before September is get my house organized and make it feel warm and cozy! One thing I did last night was make my bathroom medicine cabinet a little more chic! Check it out! 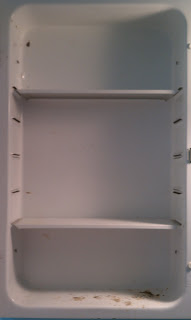 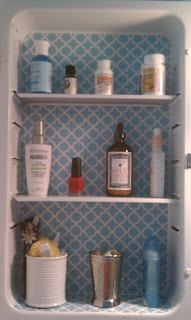 In the next couple of days I am going to post some of the yummy desserts I have made over the past few months. Stay tuned!
Posted by Julie at Friday, June 22, 2012 No comments: 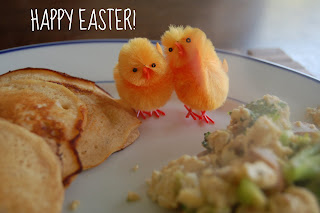 Happy Easter to everyone! This Easter was very enjoyable. Woke up and took Sparkie to the dog park and came back to make yummy homemade whole grain pancakes and a egg scramble. Usually we go to my in laws but this year we decided to take it easy. Instead we went to a late lunch with my mom. It was nice not having to cook or clean before guests arrive or having to make something and drive out of town to see family. Just us. Hope everyone had a nice holiday with family.

Today is St. Patrick's Day and I have a baby shower to go to for a girlfriend I have known since I was 11! I can't believe babies are entering or have entered our lives! Pretty cool! I made chocolate cupcakes with a marshmallow mint frosting. I thought these were pretty yummy! All the girls said they tasted very similar to Girl Scout Thin Mint cookies But better! I used the cupcake recipe from Eilnor Klivans' book "Cupcakes!".

In a double broiler melt the unsweetened and semisweet chocolate. Stir until chocolate has melted and is smooth. Remove from heat and set aside.

In a separate bowl sift the flour, baking powder, baking soda, and salt.

Cream the butter and sugar with an electric mixer on medium speed for about 2-3 minutes until fluffy, stopping to scrape the sides of the bowl if necessary.

Reduce speed to low, and carefully pour in the melted chocolate just until combined. Add the eggs one at a time being careful not to over beat but making sure the eggs have blended into the batter.

On medium, add the vanilla beat until creamy for about a minute. Mix in the sour cream until it has been incorporated well and no visible white streaks remain.

On low speed add half of the flour, mix until just incorporated, mix in the water. Finally add in remaining flour and mix until it is incorporated and the batter looks smooth.

Fill each liner with 1/3 cup of the batter. Bake for about 18-20 minutes until the tops feel firm and a toothpick comes out clean. Cool the cupcakes on a wire rack for 30 minutes before frosting.

(from Cupcakes! by Elinor Klivans)

Put th sugar, water, egg whites and cream of tartar in a heatproof bowl or the top of a double boiler with at least a 2-quart capacity and beat with a handheld electric mixer on high speed until opaque,white and faomy, about 1 minute. Put the bowl over, but not touching, a saucepan of barely simmering water (or the bottom of the double boiler). The top container should sit firmly over the pan of hot water; be sure to keep the cord of the elctric mixer away from the burner. Beat on high speed until the frosting forms a soft peak that stands straight up if you stop the beaters and lift them up, about 7 minutes. The frosting should register 160 degrees F on the thermometer. Remove the container of frosting from the water, add the vanilla and mint extracts, and continue beating for 2 minutes to further thicken the frosting. 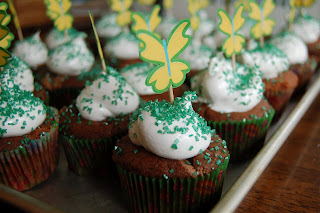 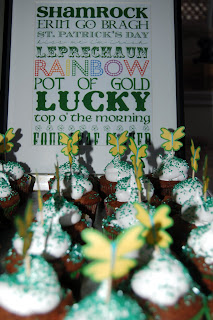 My friend, Rachelle just threw a fun 1st birthday for her son, Mason! It was so fun to see so many little kids running around all in the same place. She had it at the Sulphur Creek Nature Center. There were so many different animals to look at! Part of the party was a animal showing. The kids got to pet a snake, duck, and a chinchilla! It was super cute! Her theme was owls, which was made with a amazing cake and little treats shaped as owls. I made rice crispy treats with a owl face. They didn't turn out exactly how I envisioned but I thought they were cute, and they got eaten really fast! 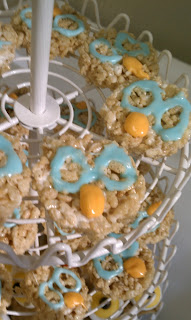 Happy Birthday Mason! I can't wait to celebrate your 2nd birthday with you! 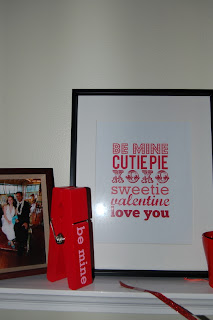 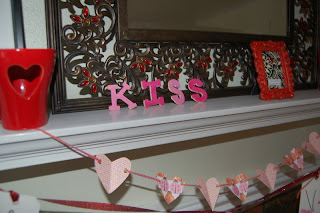 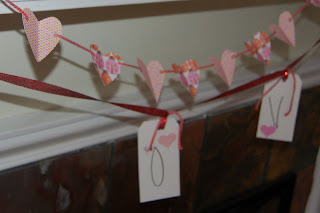 I use to HATE Valentine's Day! For the longest time, I thought it was silly! Even after I got married. Just until a few years ago...I think I really didn't like any holidays! But, now I am a a sucker for decorations and items that make a house feel warmer! It started with Halloween decorations, then Christmas now Valentine's day. I don't try and go crazy but a little red and pink to lighten up our little house helps!
Here is what I did on our mantel. I found this really cute printable that I printed out and stuck in a frame! Price: FREE. This print was found at Clean & Scentsible
Right now I am all about using my resources: items around the house. I really love doing flag banners, I think they are so cute and a great idea. Instead of printing out letters, I found some tags and wrote out "LOVE" and threw some heart stickers, put a string on each and was done with that banner. Of course, I thought I needed more! I did another banner with hearts that I cut out. For my last Valentine craft I made the door piece and had left over letters. So I put together the word KISS and painted with red and pink ink!
I did find this really large "paper clip" at Michael's Crafts that I had to have. That was my one splurge for this holiday mantel! If anyone has any other great ideas, please share, I have a week left to decorate!
Posted by Julie at Tuesday, February 07, 2012 No comments: 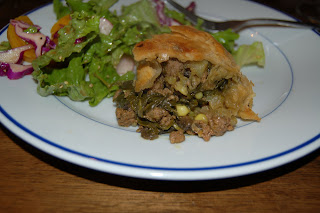 MEAT PIE sounds weird. Doesn't it? I pretty much cook every night and it seems that I have the same recipes every few weeks. I have tons of cookbooks, search the web, and even have an app to help me find recipes. But, why do I go to the same ones over and over? I guess it's just comfortable. Here is a recipe that I found on Epicurious.com. Of course I changed a little and added what I had in the re-fridge. But it was nice to have another recipe to add to my rotation. I made it easier by already having pre made pastry dough in the freezer from Trader Joes...
My husband loved it and went back for seconds so I know it was good!

Here is my version:

Cook meat and add veggies put pastry dough on top and bake in oven for 25 minutes at 375. Done and add a salad. 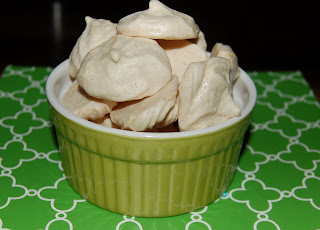 Apparently Wednesday was National Peanut Butter Day! How did I miss that? Peanut butter has been in my life since I was probably 3? I love it, I eat peanut butter ALMOST EVERYDAY!! Not kidding....When I was looking through Alice Medrich's book I found this recipe. I was in heaven! Last year sometime I went to see her do a demo on some of her cookies from this book. It happened that these clouds were one of them, she made them much larger and sprinkled some peanuts on top. YUM! Here is my version of these pop in your mouth treats!

Preheat the oven to 200 degrees. Position racks in the upper and lower thirds of the oven

Combine the egg whites and cream of tartar in a clean dry bowl. Beat at medium-high speed with a heavy-duty stand mixer (or high speed with a hand mixer) until the egg whites are creamy white (instead of translucent) and hold a soft shape when the beaters are lifted. Continue to beat on medium to high speed, adding the sugar a little at a time, taking 1 1/2 to 2 minutes in all, until the whites are very stiff. Scatter small spoonfuls of peanut butter over the meringue. With a large rubber spatula, fold about three strokes. Scatter the nuts and chocolate over the batter and continue to fold until they are dispersed and the peanut butter is mostly blended; a few uneven streaks of white meringue are okay.

Drop rounded tablespoons of meringue 1 1/2 inches apart on the lined cookie sheets. Bake for 1 1/2 hours. Rotate the pans from top to bottom and from front to back halfway through the baking time to ensure even baking. Remove a test meringue and let it cool completely before taking a bite (meringues are never crisp when hot.) If the test meringue is completely dry and crisp, turn off the oven and let the remaining meringues cool completely in the oven. If the test meringue is soft or chewy or sticks to your teeth, bake for another 15 to 20 minutes before testing another.

Julie
San Mateo, CA, United States
I'm Julie. I am in my mid thirties. Oh my mid thirties all ready? How did that happen? I don't feel like I'm a mid thirty? I grew up with my mom making the yummiest food and desserts. I was born in San Francisco and was raised there till about 10. Moved down south a bit (30 miles) to the burbs... Today I live with my surfer, home inspecting husband, a cute and fat cat and a 8 month old Black Lab puppy. I love to bake, cook and craft. Hope you enjoy my journal of crafting and being in the kitchen!